Guinea Hens for Sale -Tick Borne Illness on the Rise

Once again, I was victim to another tick-borne illness in the spring of 2019! This time I contracted Alpha-Gal from a bite of the Lone Star tick.

After many months of research and being afraid of going in the yard, I was disappointed. I find that the only recourse was to have an exterminator spray our yard with cancer-causing pesticides.

My experience was in 2008. Although I found the web well established, I found no other resolution to this problem by searching the internet. I ran across an ad in the local paper listing guinea hens for sale and how they eat ticks. Focusing my search on guinea hens, I found some information, however, not enough to confirm the claims.

I thought, "what the heck, we have enough space to construct a small chicken coop, I'm buying a few hens." We purchased six keets (which are guinea hen babies). They were wild; however, we fed them in the yard for the first few weeks, made a perimeter around the property line with food each day, and it worked!

Not only did they stay in the yard, but we were bug-free in less than two weeks. We had virtually no ticks, fewer mosquitos, as a matter of fact, we hardly found any bugs in the yard. The guinea hens slept in the trees at night, and they were maintenance-free. We had them for three years! 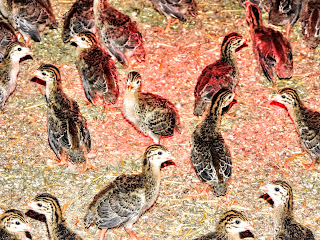 When it was time to replace the hens in 2011, since we were down to only two guineas, we drove two hours to PA! This is when we learned that if we purchase Silkie chickens with the guinea's, the silkies will lay on the guinea eggs for further hatchings since guinea hens rarely lay on their eggs long enough to hatch. We tried this too, and it worked. A year later, we had nearly 30 birds!

Well, this caused a little problem. We out-grew our yard. We lived in the city limits and could not raise the birds as we were. We had no second thought, we were moving, and that's the bottom line. After living with Lime disease, I knew there was no choice and would have to sacrifice and move so the birds could have a bigger yard!

We moved to a new place, 15 acres, and noticed this place was loaded with ticks. We could not go outside, not even around the house, without finding a tick daily. By this time had over 30 guineas, and in less than two weeks, we were once again bug-free. This experience was in 2015. 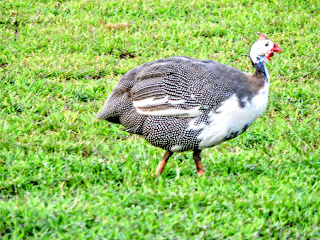 Last year in 2019, we sold over 1000 guineas! We had people from long distances travel to our ranch to purchase guineas. We now have over 150 of our birds, including most of the ten from the second batch in 2011! We have over 160 silkie chickens, and the hatching is around the clock.

A client came from the area of exit six on the New Jersey turnpike, (near Great Adventure). He informed us about this disease that his wife contracted that made her allergic to meat for life without a cure! As we encounter more ticks during the summer months, your chances for getting bitten by the allergy-carrying Lone Star tick increases in New Jersey. Now that I contracted this new disease on the rise in New Jersey we are selling more than ever.

Alpha-Gal may sound empowering, but the nickname, short for galactose-alpha-1, 3-galactose, is a sugar molecule that might cause you to become allergic to meat.

The sugar molecule spreads from the Lone Star tick bite, named for the Texas-shaped marking on its back. Once bitten by a Lone Star tick, the body's immune system becomes rewired. From this, your body creates Alpha-Gal antibodies, and, from that point on, the body fights Alpha-Gal sugar molecules. If you develop Alpha-Gal allergy syndrome, you will realize your illness after eating meat, which can be challenging to diagnose.

Although we did not invent the guinea, we feel honored that we can provide this resource to others. Guineas are a natural form of pest control. Guineas are far more valuable than using cancer-causing pesticides to control harmful, disease-carrying ticks.

We have guineas available starting February 14, 2020! If you need them, call and leave a message. We can be available nearly seven days a week for pickup.

Remember, guinea hens are insect-eating. They can make an enormous difference to your bug population and your quality of life. Guineas eat 90% of all bugs.

Download our App on Apple or Andriod!
Indigenous App